In collaboration with: Bianka Jávorcsik

“The first time I learned about archaic photographic techniques was in the summer of 2013. Analogue, hand made works with physical materials were always more interesting to me, so it wasn’t a surprise how fascinated I was when my teacher showed me techniques from the beginning of photography. I was amazed by how the right use of a few chemicals and some light can result in photographs. One of these techniques was the argentotype. It’s basically a copying technique. A silver-based chemical mixture, which is sensitive to light, is coated on some material (usually paper). The paper absorbs the mixture and becomes light-sensitive itself. When placing a photo negative tight on the wet paper, then lighting it with direct sunlight or a UV lamp, a brownish positive photo is created. The color depends on the proportion of the ingredients and on the type of paper. The more I practiced with this technique the more questions I had about it. For example, what happens if the used material is not paper but something else. The thought of using this technique with simple glass instead of paper was interesting, so with the help of my teacher I started to experiment with it. Using glass instead of paper made the process more difficult and much more unstable, but the results were intriguing. In the meantime, I met Philippe, and it occurred to me that creating something by combining contemporary music with photography is a field worth exploring. I asked him to compose a short piece for piano, which I could use. I copied the negative picture of the score using the argentotype process on the glass. Then I broke the photo using a hammer so I could assemble the broken parts in different combinations, trying to create smaller, but still performable pieces from the original photo, in fact, a new score. As a result, the form of the music changed completely but the material stayed the same. After comparing the original recording of the piece with the recordings of the “new scores” it is ascertainable that even after this whole process the music is still “alive”. The new recordings are shorter but have the same emotion and meaning as the original. This proves that re-using material to create something new is possible even when random events organize the process (for example the use of the hammer), but the link between the original and new music stays detectable. This work was inspired by the curiosity of how stochastic acts can produce interpretable results.“ 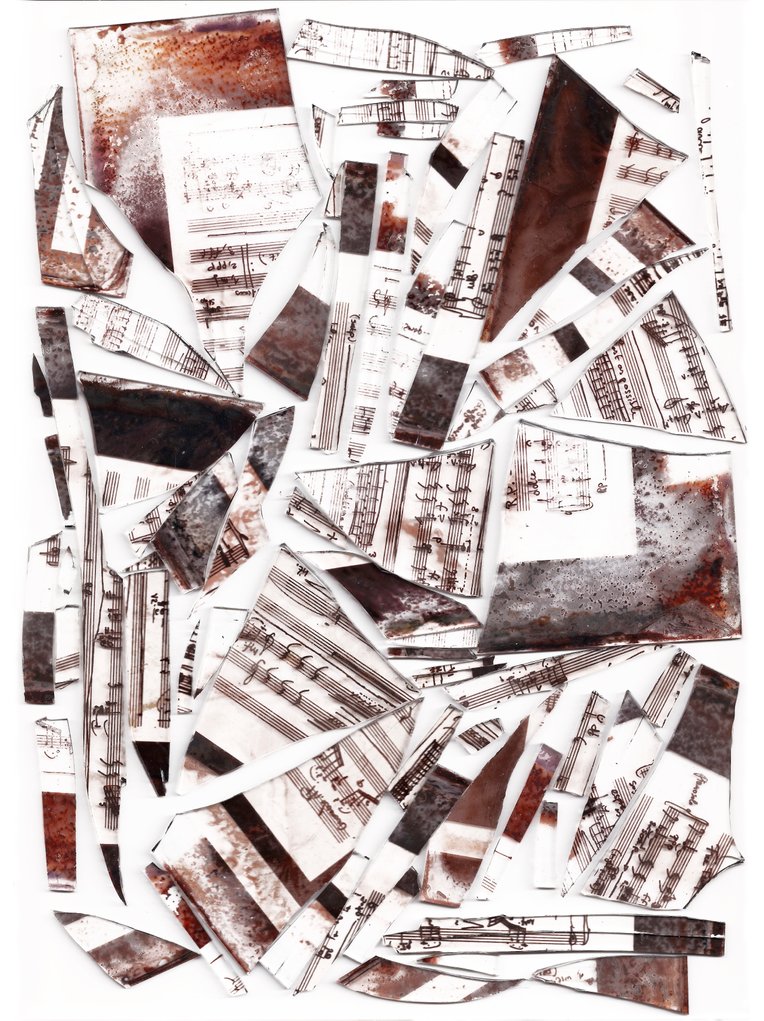