My inspiration source for this work were five poems by Clark Ashton Smith. The poems of Smith always evoked powerful images in my mind. I wanted to be able to replicate this same evocation in the listener, but with my own music. His words just amplified my imagination. Smith started writing poetry early on in his career but later turned to fiction and visual arts. He’s remembered as one of “The Last of the Great Romantics.” When describing his own writing style, he states:

"My own conscious ideal has been to delude the reader into accepting an impossibility, or series of impossibilities, by means of a sort of verbal black magic, in the achievement of which I make use of prose-rhythm, metaphor, simile, tone-color, counter-point, and other stylistic resources, like a sort of incantation."

His first volume of poems called The Star-Treader and Other Poems, was written when he was 19. I felt some naivety when reading this bundle but in the right way. I found his poems so innocent and pure, yet powerful and vivid.

I composed five short pieces for piano together with a short prologue and epilogue. Each piece was based on a poem by Smith. The poems, as well as the compositions, have very different characters and styles. They are linked by a particular atmosphere but are also presentable by themselves. The concept of Poetry for Piano is that the performers may choose in which order they want to play the five poems. They must play the prologue first, then the five poems in their preferred order, and the epilogue at the end. This way, there are 120 different performances possible.

A live recording made on the Polyphonic Performance Spaces Day 4
concert: The mirror, the lamp, and the piano 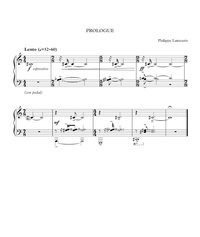